One of the most thrilling aspects of writing, to me, is that there is always something new to try. There’s always a technique, a structure, a theme, a genre you’ve never broached before.

My current WIP holds a lot of these for me, something I’ve discussed in some of my writing vlogs so far, but one thing I haven’t yet talked about is my main character – and how she’s completely different from basically every other one I’ve written so far.

That’s not to say that all of them have been the same up until now; they’ve each had their own personalities, strengths and flaws, tendencies, and habits. However, as a general rule, I’ve been drawn to write protagonists who speak up, who follow their impulses (for better and for worse), who are basically socially fearless. They’re fun! I’ve always loved reading and writing characters like this, especially when it comes to their dialogue and all the potential for one-liners and back-and-forth with other characters.

When my current POV character started to take form, though, I was drawn toward something else: a character who feels and believes just as strongly as all those I’ve written before, but internally rather than out loud. Instead of channeling all that personality into open dialogue, this character stops to think, takes a moment (or a few) to ponder, before speaking up.

She’s not really shy, not socially anxious, not even completely introverted – in fact, she’s more of a complicated ambivert! And in accepting her as my POV character, I’ve challenged myself to tell a story through the eyes and thoughts of the most introspective narrator of all my stories so far.

Not gonna lie: while I still love all my impulsive, outspoken main characters (and would write one again in a heartbeat if the story called for it!), I’m forming a bond with my current protagonist that is unlike any of the ones before her. Even if she’s proven far more complicated than I could have known at Chapter 1…!

Do you have a favorite personality trait in a POV character, to write or to read? Let me know in the comments or on Twitter!

Starting from the Very Beginning

One thought on “Writing a Quiet POV Character” 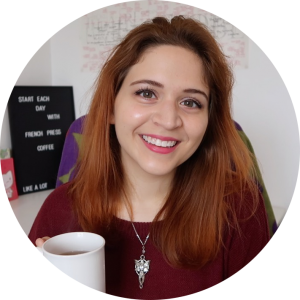 Hi, I’m Andrea! I’m a novel writer, a vlogger on YouTube, a cat mom, and (among many other things) a coffee addict. Learn more about me.